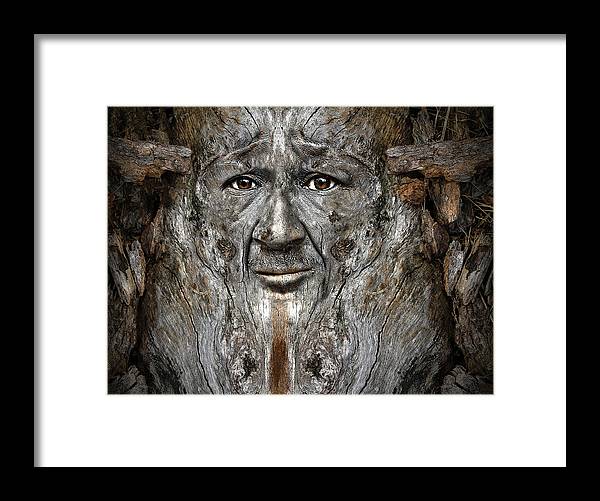 Jesse Sapskin framed print by Rick Mosher.   Bring your print to life with hundreds of different frame and mat combinations. Our framed prints are assembled, packaged, and shipped by our expert framing staff and delivered "ready to hang" with pre-attached hanging wire, mounting hooks, and nails.

Jesse Sapskin is a Brown Man of the Muir. Brown Men(Moor Men,Brown Men of the Muirs)The guardians of wildlife that live in heath,scrub & moor-land.They're shy & wary of humans.If their wrath is incurred,then you should cross a river/brook for they're reluctant to cross running water.They're thought to be a Fay species & that they possess the ability to transform themselves into moor-land animals,in order to avoid being captured. I came across Jesse Sapskin in Eastern Pennsylvania.

Rick Mosher is best known as an artist working in traditional paint mediums (watercolor, oil and acrylic) He is also a photographer and digital artist. He has a tremendous love for color and most of his work reflects this. He is a recovered alcoholic and addict and a lot of his work reflects his addiction and recovery. Rick was influenced early in his career by a class in Photojournalism at Kent State University in 1970 and has always had an interest in photography and digital art. He worked in the Architectural Woodworking Industry for over 35 years as a wood finisher and faux painter doing his work in some of the most expensive homes in the United States. During this period he created a lot of his original Woodies. He attended...