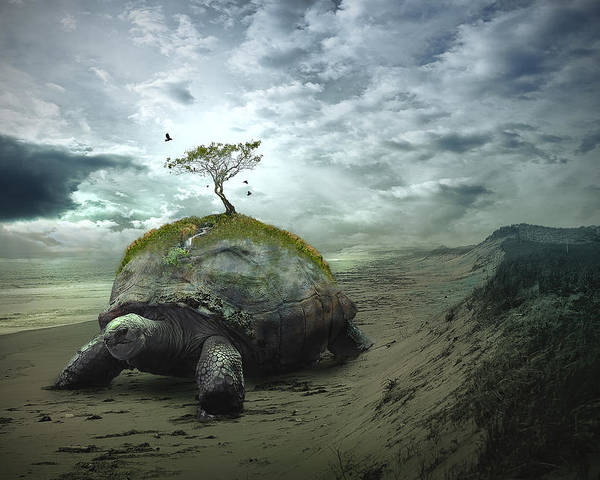 Rolled in a Tube

Iroquois Creation Story poster by Rick Mosher.   Our posters are produced on acid-free papers using archival inks to guarantee that they last a lifetime without fading or loss of color. All posters include a 1" white border around the image to allow for future framing and matting, if desired.

This is a digital art piece inspired by the Iroquois Creation Story. Limited Edition prints on canvas (5) are available for purchase. Here is link to... more

This is a digital art piece inspired by the Iroquois Creation Story. Limited Edition prints on canvas (5) are available for purchase. Here is link to the entire story for those interested: http://moshepit.blogspot.com/2014/08/iroquois-creation-story.html This was created from Rick's original photographs over a 2 year period from 2 different states. My Iroquois Creation Story is now a movie star! He is in Ric Burns movie "People of the Standing Stone" narrated by Kevin Costner. If you have Amazon prime you can watch it for free here: https://www.amazon.com/Oneida-Nation-American-Revolutionary-Standing/dp/B07962HYJL Won PSA projected image division Best of Show March 2017 “See the TURTLE of enormous girth! On his shell he holds the earth. His thought is slow but always kind; He holds us all within his mind. On his back all vows are made; He sees the truth but mayn’t aid. He loves the land and loves the sea, And even loves a child like me.” -Stephen King The Dark Tower

Rick Mosher is best known as an artist working in traditional paint mediums (watercolor, oil and acrylic) He is also a photographer and digital artist. He has a tremendous love for color and most of his work reflects this. He is a recovered alcoholic and addict and a lot of his work reflects his addiction and recovery. Rick was influenced early in his career by a class in Photojournalism at Kent State University in 1970 and has always had an interest in photography and digital art. He worked in the Architectural Woodworking Industry for over 35 years as a wood finisher and faux painter doing his work in some of the most expensive homes in the United States. During this period he created a lot of his original Woodies. He attended...